Take a look at our deep dive into determining which U.S. cities are best for plumbers, pipefitters, and steamfitters to pursue their careers in.

Moreover, many of the top cities in our study are experiencing high growth in their local economies, hot housing markets, or job growth related to the energy sector. High demand for housing means faster development of new construction and more home sales, meaning greater demand for plumbers to tackle home renovations, maintenance, and new plumbing installation. With cities tied closely to new energy projects, like natural gas or oil pipelines, there is a greater need for pipefitters and steamfitters.

Thirty-nine of the top 50 best cities for plumbers, pipefitters, and steamfitters are small or midsize cities, but the small town atmosphere may not be ideal for everyone. In order to highlight this distinction in lifestyle preference, our study segments cities into different sizes based on metro area population, listing the top 10 small (population under 150,000), midsize (population of 150,000-500,000), and large (greater than 500,000 population) cities for plumbers. 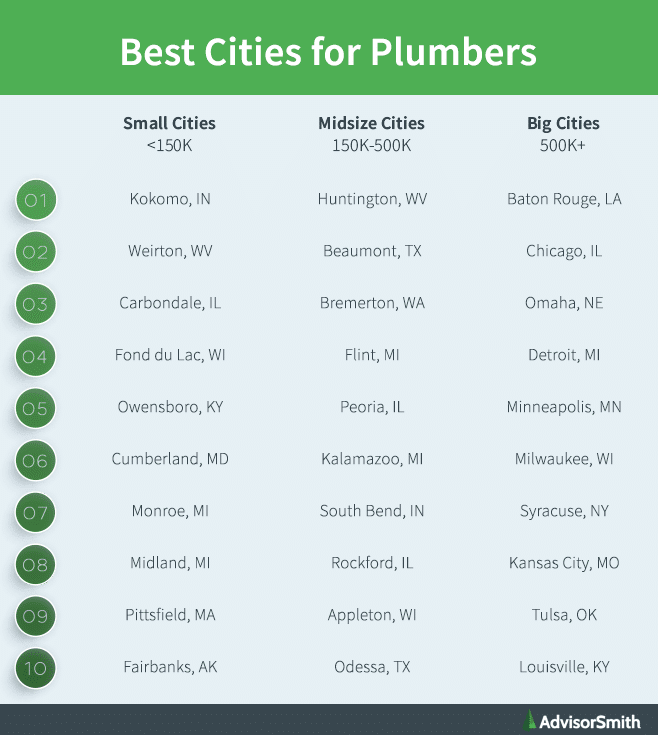 Located 50 miles north of Indianapolis, Kokomo is the top city in our study of the best cities for plumbers, pipefitters, and steamfitters. Kokomo, Indiana’s 13th-largest city, has historically been known for its manufacturing industry, with top employers including Fiat Chrysler Automobiles, General Motors, and Haynes International. During the late 2000s, Kokomo was hard hit by the Great Depression, particularly because of its close ties to the auto industry and that industry’s steep decline. Since then, however, Kokomo has experienced a tremendous rebound, with unemployment dropping to 3.1% in December 2017, down from its peak of 20.2% in June 2009. Much of this can be attributed to the auto bailout, but Kokomo has also made efforts to diversify its economy and reinvest stimulus funds into its local economy to improve quality of life and housing.

Huntington is the #1 midsize city in our study for plumbers, pipefitters, and steamfitters. Located on the western edge of West Virginia, sharing its northern border with Ohio and close to the eastern border of Kentucky, Huntington is part of the Huntington-Ashland metropolitan area, often called the “Tri-State area.” Huntington has an economy that has historically been fueled by the natural resources available, including steel, coal, oil, and natural gas, and some of the top-paying industries in the city include Utilities, Mining, and Oil and Gas Extraction. Top employers in the Huntington area include CSX Huntington, Marathon Petroleum, and Steel of West Virginia.

Plumbers, pipefitters, and steamfitters in Huntington earned an average annual salary of $85,050, the highest salary in our study, which is 46% above the national average. The city also has a cost of living that is 18% lower than the average U.S. city.

Weirton is located in the Northern Panhandle region of West Virginia, sandwiched in between Ohio and Pennsylvania, and is part of the Weirton-Steubenville metropolitan area. Weirton’s economy has historically been dominated by the steel industry, with ArcelorMittal as the top industry employer. As that industry has declined in recent years, however, the energy industry has been the driving force behind Weirton’s economy. The growing shale industry has served as a boon to the Northern Panhandle, with natural gas production fueling other economic areas as well, including the metal, chemical, and construction industries.

Weirton hosts an incredible 118% more jobs for plumbers, pipefitters, and steamfitters on a per-capita basis compared with the U.S. average. Additionally, salaries for plumbers in Weirton average $68,480, 23% above the average, while the cost of living is 19% below the national average.

Situated about 85 miles east of Houston, Beaumont is part of the Beaumont-Port Arthur metropolitan area, a major industrial area on the Texas Gulf Coast. Beaumont’s economy and history has been significantly influenced by the discovery of oil at Spindletop in the early 1900s. This oil field was one of the largest discovered in American history, and to this day, it continues to drive Beaumont’s economy. Beaumont is one of the major petrochemical refining areas in the nation, and top employers in the area include ExxonMobil Corporation, Goodyear Tire and Rubber Company, and Valero Energy.

Beaumont plumbers earn on average $58,550 annually, just a touch higher than the national average. Beaumont also boasts 208% more jobs for plumbers, pipefitters, and steamfitters compared with the average U.S. city, with a cost of living that is 18% below the national average.

Located just west of Seattle, Bremerton is part of the Bremerton-Silverdale metroplitan area, a group of island communities across Puget Sound’s main channel. Just a 30-minute ferry ride from Seattle, Bremerton has seen a jump in the local housing market as home buyers seek out affordability that offers a manageable commute to downtown Seattle. Much of the housing boom from nearby King County, which includes cities Seattle and Bellevue, has spilled over to Bremerton, with prices in Bremerton up over 20% in the last year, multiple offers the norm, and homes sitting on the market for less than 10 days on average.

Below, we list the top 50 cities for plumbers, pipefitters, and steamfitters. In addition to the ranking, we provide the total number of jobs for plumbers, along with the average annual salary, location quotient, cost of living, and the size of the city.

Our study used the average annual salaries that plumbers, pipefitters, and steamfitters in each city were paid, with cities with higher salaries scoring more highly in our study.

Our analysis adjusted the salaries earned in each city by a cost of living index, in order to equalize comparisons across cities. The cost of living, including necessities such as rent, transportation, and groceries, varies by city, so it is important to normalize the salaries so that the cities can be compared fairly. Cities with a lower cost of living were ranked more highly in our study.

3. The density of jobs for plumbers in each city

In 2018, there were 500,300 jobs for plumbers, pipefitters, and steamfitters in the United States, according to the Bureau of Labor Statistics. The BLS also predicts that employment for plumbers, pipefitters, and steamfitters will grow at a 14% pace over the 10-year period of 2018-2028, which is almost three times faster than the national job growth outlook.

Demand for plumbers continues to be bolstered by new construction in housing and commercial buildings, as well as changes in building codes that require retrofitting of existing plumbing systems. While employment can vary based on how the economy is doing—there is generally less new construction when the economy is in a downturn—repairs and maintenance of existing plumbing and pipes provides stable work for plumbers, pipefitters, and steamfitters.