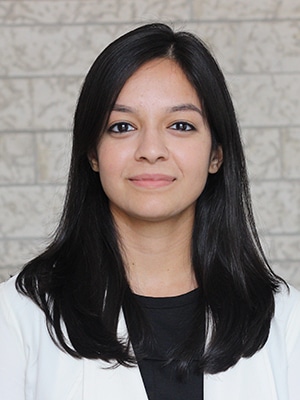 Divya Chaturvedi recently graduated from York University in Toronto, Canada, where she majored in Mathematics for Commerce with a specialization in Actuarial Science. Divya currently works as an Actuarial Analyst at Aviva Canada, and during her final year at York U, she was president of the Actuarial Student Association. We spoke with Divya in July 2019.

I really like sports, so I play anything from volleyball to basketball, but I go out of my way to play soccer. That’s my favorite sport, and I’ve been playing since I was a kid.

What has your experience at York University been like?

It’s been quite an experience for me. When I started university, it was the first time that I had been to Canada, and it was a completely different learning environment from back home in Kolkata, India.

It’s very interesting to be in this field at a time when there is so much technological change, and there’s risk involved in every aspect of what we do every day.

I did a couple of years of university back home at Lady Brabourne College, where I studied Statistics. At Lady Brabourne, we didn’t have grades and such. We had straight-up marks, and it was a bit more competitive. The learning methods are quite different actually from here. At York, we tend to apply more of what we learn, rather than just focusing on theories. That was quite different.

My experience at York was really nice. I got to know a lot of people from my classes and from the intramural soccer league, and I was able to get involved with the Actuarial Student Association.

What other schools were you considering, and why did you choose York University?

Apart from York, I considered the University of Toronto and Ryerson University. My brother went to York, so the university came highly recommended. I also fell in love with the campus on my first evening there.

My college back home was basically one building and that’s it. It wasn’t much to look at. The wide-open spaces at York, the amount of greenery, and also the soccer field, all convinced me that I had to go to York.

I’ve always loved math, and there was no question that I would pursue a career in math. With regards to actuarial science, one of my cousins is an actuary now, and she suggested that I look into this career when I was in school. She said it’s a good combination of math, economics, and computer science, which were basically a few of my interests.

Why should other students consider a focus in actuarial science?

It’s a superb career if you really like problem solving and analysis. Moreover, it’s not only for math nerds, but also for people who like to work in a fast-paced, challenging environment.

I’m working full time now at Aviva, and my job here requires a lot of critical thinking, so it’s not just all math. The field is really interesting, and considering all the innovations happening in the industry, it’s a really good industry to be in right now.

It’s been surprisingly good, considering it’s a relatively new program. York has quite a new program compared to, say, Waterloo. While the program is still quite small, I was able to get to know most of my classmates, and we would all help each other out. One of my classmates who graduated before me actually helped me get the job I am in right now.

The director of our program, Dr. Edward Furman, is instrumental in the success of the York program. He really cares about his students, and he tries to help them out in any way he can.

In terms of the courses, you’re taught topics that you don’t even know you might need in the future. It’s a very well-designed program. I have not taken a single course that I felt was a waste of time.

In terms of clubs, I was the president of the Actuarial Student Association at York in my final year. We held information sessions for new students who were interested and wanted to know more about the field, as well as recruitment sessions for companies to enable them to talk to students directly. This was important because York does not have an official co-op program yet.

When I first joined York, the people in the Actuarial Student Association helped me out a lot. The club holds tutorials free of charge for the first two actuarial exams. And even though we had courses at York that would help with those exams, it was always helpful to talk to the senior students who were either studying for the exam or had just passed it. It was helpful to learn the tips and tricks for passing those exams from students, rather than just learning from the courses.

What was your favorite class and why?

One of my favorite classes was Risk Theory. It involved a lot of math, but it also gave me a lot of insight into what insurance companies do. It basically covered loss model and credibility theory. It doesn’t apply to what I do right now, but it probably will if I ever join the pricing side. Given the distribution of the losses, it helps you price that particular loss exposure. It was super interesting. I didn’t know how useful it would be, but it was a lot of fun while I was learning it.

The actuarial exams have been the most challenging part about actuarial science. I can’t say that I did not know about this because I had been warned several times by people in the program.

Have you had any insurance-related internships? If so, how was your experience?

I had four co-op terms, three of them where I was in life, because I just wanted to try both sides, and one was at Aviva Canada with my current team actually. So I tried both sides, life insurance and general insurance, and I really liked general insurance as well as the culture at Aviva. It was really satisfying to be able to apply material that I learned in school to real-life work, and knowing it was something that held actual meaning, rather than just coursework.

In regards to life insurance, an interesting trend is that people are living longer, and insurance companies are already on top of that. They have their longevity insurance products. And concerning general insurance or P&C, some interesting developments are the advent of driverless cars, as well as issues of cybersecurity.

How has your experience been thus far in the full-time workforce? What’s it been like at Aviva?

It’s been really nice at Aviva. I really like the work culture. The reserving team handles all lines of business, so it’s not split up between provinces or anything.

The work is super interesting, and I’m working on different projects and getting to know the overall general insurance side of the industry. I did work on one of the analysis lines, which was collision for all of the provinces. It was super interesting to see how the reserves are set, so we make sure that we’re not out of money when we actually need to pay out.

Right now I’m in the DCAT team, which stands for Dynamic Capital Adequacy Testing, and it’s been super interesting. We test our capital to see if we are solvent, and we shock our business plan with scenarios like, “What if an earthquake hits British Columbia? How will that affect our business overall?” And if it’s below a set target, then we basically have some management actions. It’s a lot of fun actually.

In the short term, I would like to be able to complete my exams as soon as possible. I’ve also been trying to take some courses, like programming courses. I think it would be good to have experience in that area as well, given the technological advancements of the industry. I think going forward, with the AI frenzy that’s going on, it would be helpful to have that in your skill set as well.

Insurance is not just actuarial. I’ve been taking this online course, and it talks about the other departments in insurance apart from the actuarial department. There’s claims, underwriting, etc.

It’s very interesting to be in this field at a time when there is so much technological change, and there’s risk involved in every aspect of what we do every day. Managing these risks is the utmost priority for most people, and that is basically our job.

I would recommend for people interested in the field to speak to other professionals. Go on lots of coffee chats. Attend webinars and learn more about the industry. There’s a lot of innovation going on right now, and I think it’s a great industry to be in at this time.

Do you have any favorite books, websites, or media that you would recommend for someone interested in insurance?

I go on Actuarial Outpost a lot, and I use it to study for my exams. They have a ton of helpful posts on there with tips and tricks for various exams, and a lot of people are on there discussing various topics. If you have an issue or a question, you will most definitely find an answer on there.