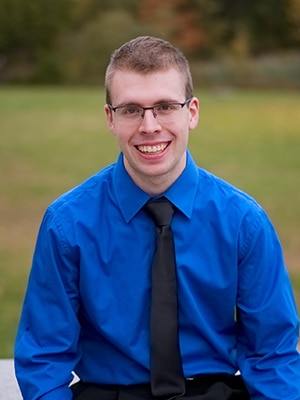 Rob Wondolowski attends Worcester Polytechnic Institute (WPI) in Worcester, Massachusetts. He is a junior majoring in Actuarial Science and is also interested in all things music, from playing the trombone to performing in acapella groups. He will graduate in May 2020 and is interning at the Hanover Insurance Group this summer. We spoke with Rob in March 2019.

Tell us about your experience at Worcester Polytechnic Institute.

My experience also has a heavy concentration on my major. So far, I’ve taken all of the actuarial math courses that WPI offers, and I’ve also taken a lot of general math courses, as well as basic science, computer science, and business classes.

The workload at WPI very much varies, depending on the classes that I’m taking. I’m also a peer learning assistant, which involves helping to teach a calculus course. Last term, I was putting in 18-hour days every weekday because of rehearsals, grading, preparing to teach every week, and also getting my own work done. But generally, it’s not that bad.

Right now, I’m living in Worcester, England, which is northwest of London. I’m here as a part of what WPI calls an “interdisciplinary qualifying project,” which is a project outside of your major that is required for graduating. Generally, students go abroad, and WPI has over 40 project sites across the globe.

We’re working on a project in Worcester to analyze the difference between expressed and actual heating behaviors of students living in single family homes that weren’t really meant for a bunch of people to live there. We’re collecting data and analyzing it to see whether students believe they are using the same amount of hot water and heat as they’re actually using.

What other schools were you considering, and why did you choose Worcester Polytechnic Institute?

I applied to four schools: Bryant University, UMass Amherst, UConn, and WPI. I knew I wanted to be an actuarial math major because I wanted to do math, but I didn’t necessarily want to go the pure math route, and I had no idea applied math existed at the time.

So, I went with actuarial math, and that limited my choice to four schools in New England. It was pretty much between Bryant and WPI, but WPI had the strongest music program overall of all the schools that had actuarial math. In high school, I was involved in literally every performing group from drama to singing to band, so I wanted to make sure to continue my musical growth.

My goal when choosing majors and careers was that I wanted to basically solve problems all day—that’s what I enjoy doing.

For me, it was kind of luck. My goal when choosing majors and careers was that I wanted to basically solve problems all day—that’s what I enjoy doing. I loved working in puzzle books and solving new, challenging problems, and I saw actuarial science as an opportunity to continue that. Also, after taking AP Calculus and AP Statistics in high school, I realized I wanted to do something that involved both of those studies, and actuarial science was the perfect continuation of all of that.

Why should other students consider a focus in actuarial science?

It’s definitely more fun than it sounds. A lot of students see that you have to take these tests in order to get you qualified with the Society of Actuaries, and they kind of get discouraged by that. But they shouldn’t be scared. If you love what you’re studying, the tests will come, and you’ll enjoy studying for them even though it’s not the most fun thing to do on a Wednesday night. And knowing that it gets you qualified is a good feeling.

Also, if you love probability, which is my biggest love in all of math, and if you like financial math, then actuarial science is the perfect blend of all of that.

The program has been great. It’s definitely designed in a way where it builds up the concepts really naturally. It doesn’t feel like you’re jumping around at all. Everything builds on itself.

What’s especially great is that WPI has two professors in actuarial mathematics, and your professor is your advisor. My advisor, Professor Jon Abraham, and I know each other pretty well, and I’m able to email him whenever I have a question about anything. My favorite story is that one time I emailed him at one in the morning on a Saturday with a scheduling problem, and he got back to me in five minutes! It’s definitely a good, personal program with a lot of one-on-one interaction, which I think is really helpful for anyone in any major.

I really enjoyed a class taught by Professor Abraham called Survival Models. It’s basically modeling probability distributions to data, using various methods. The reason I really liked this class is there were a lot of real applications.

One project involved being given 800,000 theoretical data points, which included dates people were born, died, or when we stopped studying them. From those data points, we built a mortality table, which is the probability of them dying at any given point. The data we had allowed me to construct a mortality table from the ages of 60 to 70. I just found that entire process a lot of fun—doing actual work with the data, instead of sitting there and just solving a single problem.

What is unique about focusing on actuarial science relative to other majors you could have chosen?

What’s unique is that I find actuarial mathematics even more applied than applied math. Which is what I really love—I love applying math to things. You do learn the theory behind the math, but in the end, you’re solving real problems as opposed to pure math, which is more proving that an arbitrary formula works. And it’s helpful to know that, but it’s not what I love doing. Applied math is a lot more pure math than it is learning economics and the business side of things.

The most difficult thing I’ve ever studied was pure math in a class called Real Analysis, which is also required for the major. A lot of people get discouraged by that class, but I didn’t mind it too much. It’s definitely good to know, and I think it’s pretty well known within our school that that’s the toughest class you’ll ever have to take. In the class, you essentially prove some aspects of calculus, and it can get difficult at times. But knowing that it’s just a requirement and not necessarily part of your major is good to keep in mind.

Please share any real-life experience have you had with insurance.

My freshman year, I went to the Travelers Insurance Actuarial Case Competition, and I was on a team of three WPI students. Two of us were freshmen and one was a junior. We competed against four or five other universities. We were given a challenge to set how much we wanted to keep in the reserves for the theoretical upcoming year. They gave us 100 years of historical loss data, and they wanted us to decide how much to keep for home and auto insurance and also what to do with the money we didn’t keep on hand for losses in the upcoming year.

That was definitely a place where I hadn’t really studied a lot of the concepts yet. I don’t think I had taken an actuarial class by that point, but it was good because it used my knowledge of probability and statistics, and I was able to use that to solve a more actuarial problem.

I’m still completely unsure. I’m definitely looking at my upcoming internship as a learning opportunity to learn where I do want to go, though. This past year, I’ve done quite a lot of interviews, and what I’ve learned from them is that actuarial consulting really isn’t for me. I want to work more with the data doing more data analyses, etc.

I’d tell them to talk to everybody you can. Because I definitely didn’t do that when I chose the major, and I’m very lucky that I fell in love with the major. Had I not, I would have had to change everything around my sophomore year.

Talk to everyone you know who is doing actuarial science and insurance because that will give you a good perspective when you’re looking at internships and jobs to figure out what you really want to do. Even though actuarial science seems like such a small field, there are many different directions you can go, like health insurance, life insurance, property and casualty, and consulting.