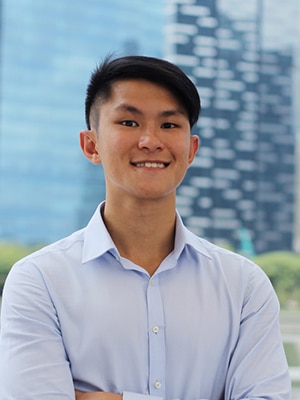 Edgar Tan is a junior in the Nanyang Business School at Nanyang Technological University in Singapore. He is doing a double major in Accountancy and Business, with a specialization in Actuarial Science. Edgar is president of the Actuarial Science Club, and he interned this past summer at Pacific Life Re. We spoke with Edgar in January 2020.

I love soccer. I will occasionally go out and play soccer with a group of friends, and I enjoy watching soccer as well. I support Liverpool, so every time they play, even though it’s the middle of the night in Singapore, I will watch the matches. I’ve supported Liverpool since the age of six, and I’m really excited about them this season. It seems like they are finally going to win the Premier League.

The content itself may be rather challenging, but it is precisely this that stretches us and forces us to think critically and analytically.

What has your experience at Nanyang Business School been like?

I’m actually quite enjoying school life. I like being able to attend classes with my friends and learning from my professors. The professors here are pretty engaging and approachable in class. The content itself may be rather challenging, but it is precisely this that stretches us and forces us to think critically and analytically. I feel myself growing not just cognitively, but also as a person. Outside of school, I stay on campus, so I enjoy being able to just go out and have meals with friends or just hanging out with friends whenever I want. I’m enjoying the freedom as well as the learning as a student here.

What other schools were you considering, and why did you choose NTU?

I applied to quite a few schools, not just in Singapore. I considered doing engineering in London. Ultimately, I chose to do business because I felt more interested in the business sector. I chose NTU through a recommendation from my seniors, actually. Some of my seniors in NTU, they spoke quite highly of the actuarial science course here. It’s the oldest actuarial science course in Singapore, and it’s also accredited by the IFoA, which is the UK professional body for actuaries. Our courses in Nanyang are actually tied to the IFoA syllabus, and we are given the opportunity to gain exemptions from the professional examinations based on our own internal exams.

Another reason I chose NTU was the numerous overseas and exchange opportunities provided by the school. NBS actually has many exchange programs, with over 300 partner universities around the world. I was attracted by the opportunity to go on an exchange program, and I did my exchange program last semester when I went to Bentley University in Boston. I had a great time and managed to make many friends overseas. It was a fulfilling and memorable trip for me.

What influenced you to pursue actuarial science?

I’ve always had an interest in business and problem-solving, and, in school, I was pretty good at math and statistics. I chose actuarial science because it aligned with both my experience and interests. Some of the seniors who went through the program gave me advice, and I learned a lot more about the program from them. I learned about what they learned, and I got to peek at their notes. Actuarial science really interested me, and it felt like something I would enjoy.

The cohort size for the program is actually pretty small. Each batch consists of about 50 students. To get into that specialization, students first have to do well in selected first-year general modules, such as financial management, statistics, and economics. This small batch size actually benefits us because it allows us more professor-to-student interactions, and it also allows us to get to know one other better. We see our batchmates in every actuarial class because there’s only one actuarial class for a certain module. This forces friendships between the batch.

The curriculum itself follows the IFoA syllabus, and it’s quite rigorous and can be quite demanding at times. But I feel that this is necessary because it’s a profession that requires a strong technical foundation. So while the examinations and the hours of study may be tough, I feel that the friends I have met through the studying sessions and the sense of accomplishment in understanding the concepts and being able to apply them to solve problems have all made the program quite worthwhile for me.

We also have an Actuarial Science Club, which is organized around five events per year. The major events will include networking events with professionals, case competitions, and reunion nights with alumni. The school actually provides a little bit of funding for the club, but we also have external sponsors, such as the IFoA and the SAS, which is the Singapore Actuarial Society. These organizations are actually pretty involved in our events and often will show up and invite professionals down for us as well.

I joined the club when I joined actuarial science, which was in year two. Last year, I joined as the chairperson of the actuarial sciences competition. With a small team, I organized a case competition for local students, not just in NTU, but for all the other universities as well. It was quite an interesting experience because I got to talk to the participants of the competition, as well as liaise with the judges who come down, and I managed to learn a lot about the industry from the event.

This year, I joined as president of the club, and it’s been pretty good because I actually know most of my classmates already, so I am actually working with my friends. So far, I’m enjoying it.

I’ve found most of the actuarial classes to be pretty enjoyable. The professors are rather dedicated to teaching, and they really take the effort to explain difficult concepts in ways that we understand. All of the theory classes are technical and challenging. The class I actually enjoyed most so far was called Actuarial Computing. It was not a theory class, but it taught us how to use computing software to perform actuarial calculations and functions. In that class, we learned how to apply our knowledge and how it is being used in the industry, using software, such as Excel VBA, and SQL.

I found the class really important and helpful in my internship because it gave me the foundational knowledge of how to utilize the software commonly used by companies, rather than just learning the theory behind it. In class, we managed to explore the various uses and play around with the software as well. I enjoyed it because there are so many ways to streamline the process and solve problems. It was very cool to see how the technology is being used to help us in our work.

I think the most challenging aspect is having the resilience to keep trying and learning despite setbacks, because there will definitely be times where you feel like just giving up. Maybe you spent two hours studying trying to answer just one question, and after that, you still couldn’t solve it. But I think that your friends will be there to help. Your professors are usually there to help and willing to see you after class as well.

And that’s something I wish I had known ahead of time because for my first semester, I actually was cooped up in my room trying to solve a certain problem for quite a while. It was only a few weeks later that I decided to just ask my professors, and they were really willing to see me after class and go through the problem process. But I think that as a learner, you just have to keep going at it, not throwing in the towel. Just keep trying, and ultimately it will pay off.

Have you had any insurance-related internships? If so, how was your experience?

I interned last summer at a firm called Pacific Life Re, which is a reinsurance firm. I was in the corporate valuation team, so we did valuation for the company. What I did was valuations for certain treaties, which were the policies with the direct insurers. I got to play with different valuation models and calculate the new business volume for the company, and it was pretty interesting for me because it was my first actuarial internship.

I felt a little out of my depth because everyone around me was so proficient with the computer programs. But my colleagues were willing to teach me step by step, and I learned a lot from them not just in terms of the theory, but also in terms of computing skills.

I think one big trend that’s coming up is insurtech, which is integrating advancing technology with some of the processes in insurance. I’m sure in all industries, technology is becoming a bigger player, but in insurance especially. Because most of our calculations are always an understanding of the risks, it can still be better improved, and technology is playing a much bigger role in it. For instance, with auto insurance, they have a device you plug into your car, and it can analyze the way you drive. Based on that, insurers can better price premiums and understand your driving habits.

For me, now I love what I am studying, and I still intend to go down the actuarial track. I’m not sure what the future holds for me, but definitely in the short term, I do wish to continue with my actuarial studies, and hopefully in the future work as an actuary.

» If you liked Edgar’s interview, check out our other actuarial science student interviews.