Take a look at our deep dive into determining which U.S. cities are best for lawyers to pursue their careers in.

Lawyers play an important role in our society by creating, interpreting, and applying the law for their clients. Besides representing clients in court, lawyers may also provide advice, draft legal documents and contracts, and assist in negotiating deals. Lawyers can also represent clients in criminal cases or work for the government in creating and interpreting laws and regulations. Becoming a lawyer requires attending law school and passing the Bar Exam in order to be admitted to the Bar in their state.

In this study, we ranked 332 cities to determine the most attractive cities where lawyers may want to pursue their careers. Below, you can find the top 50 cities for lawyers, as well as the top-10 small, midsize, and large cities for lawyers.

As the nation’s capital, Washington, D.C. ranked as the number one city for lawyers in our study. Located along the Potomac River, the city is home to the federal government of the United States, as well as major international organizations such as the World Bank and the International Monetary Fund. Besides government functions, the city also hosts major universities including Georgetown University and George Washington University as well as several major medical facilities.

Lawyers in Washington, D.C. earn an average salary of $179,980, which is 25% above the national average. The presence of the federal government, rulemaking bodies, and lobbying associations creates many jobs for attorneys in the city. Washington, D.C. had the highest location quotient of all the cities in our study, having over 3 times as many lawyers as the average U.S. city on a per-capita basis. Some of the largest law firms in Washington, D.C. include Covington & Burling LLP, Hogan Lovells U.S. LLP, Arnold & Porter Kaye Scholer LLP,
Latham & Watkins LLP, and Morgan, Lewis & Bockius LLP.

Located near the Gulf of Mexico, Houston is the 5th largest metropolitan area in the United States by population. Houston’s rise began as a trading center, with an important port and the bustling railroad industry, followed by the discovery of oil resources in Beaumont, not far from Houston. Oil and gas continues to be a major driver of the city’s economy today. Later, the city continued to diversify its economy with the establishment of the Texas Medical Center and NASA’s Johnson Space Center, leading to growth associated with the aerospace industry.

Houston’s lawyers earn salaries of $175,380 on average, which is 22% above the national average. The cost of living in Houston is also modest, with a cost of living index ranking Houston 7% below the national average, meaning lawyers in Houston can enjoy comfortable lifestyles. Several of the largest law firms in Houston include Vinson & Elkins LLP, Baker Botts LLP, Norton Rose Fulbright US LLP, Bracewell LLP, and Locke Lord LLP.

Tallahassee is the capital of the state of Florida and also home to Florida State University. Located in the northern part of the state in the Florida Panhandle, Tallahassee was chosen as the state capital as a compromise in the 1820s because it was located halfway between the other primary contending cities, Pensacola and St. Augustine. Today, the city’s economy is driven primarily by its role in state government, as well as by the major public universities that it hosts.

As the third largest metropolitan area in the country, Chicago is the most important city in the Midwest. The Chicago metro area has a population of almost 10 million people, and the city is a global hub for finance, technology, and transportation. Located on the shores of Lake Michigan, Chicago was an important trading city linking the Great Lakes and the Mississippi River. Today, the city hosts financial trading markets such as the Chicago Board of Trade, one of the busiest airports in the world at Chicago O’Hare, and the largest amount of railroad freight in the country.

Lawyers in Chicago earn an above average salary of $159,900 compared with the national average. Additionally, Chicago has a location quotient of 1.30, which means that the city hosts 30% more jobs for attorneys compared with the average U.S. city. In total, Chicago has 26,860 jobs for lawyers. Some of the largest law firms in Chicago include Kirkland & Ellis, Sidley Austin, Mayer Brown, Jenner & Block, and Winston & Strawn.

The city of Miami, located in South Florida, is a dense metropolitan area that features beautiful sandy beaches and numerous high rises. The metropolitan area has a population of over 6 million people and is a major finance, international trade, and tourism hub. Miami attracts many residents relocating from the Northeast and Latin America, attracted by its pleasant climate, low taxes, and stable economic and political environment.

Miami has 20,140 lawyers, which is 75% more on a per-capita basis than the average U.S. city, making employment easy to find. Attorneys in Miami earned an average salary of $145,430, which is about the national average. Some of the largest law firms in Miami include Greenberg Traurig, Akerman LLP, Holland & Knight, Shutts & Bowen LLP, and Gunster.

Although the best jobs for lawyers are found primarily in large cities, not every attorney wants to live in a big city. AdvisorSmith segmented our study into small (population less than 150,000), midsize (population 150,000-500,000) and large (population above 500,000) cities in order to highlight different lifestyles that are available for lawyers. 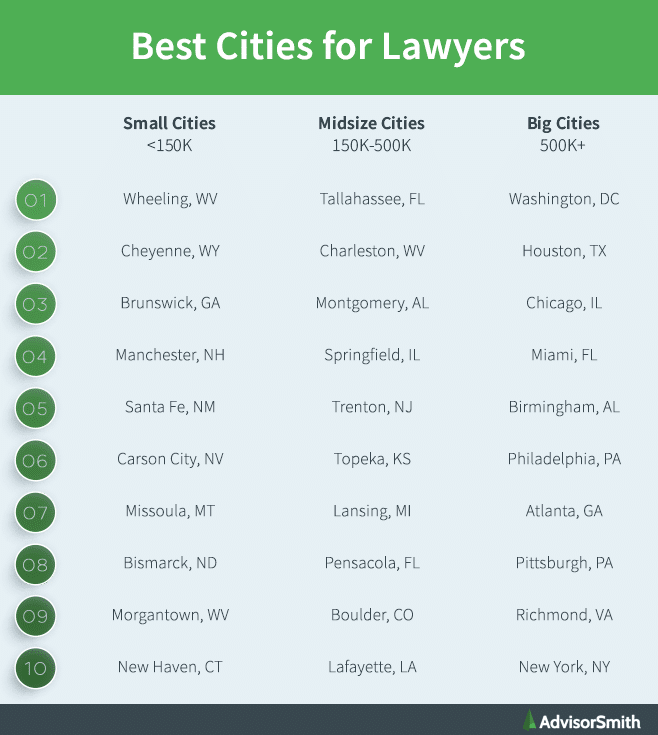 The top 50 cities for attorneys are listed below. In addition to the ranking, we also provide information on the total number of jobs in each city, average annual salaries, the cost of living, the location quotient, and the city’s size.

AdvisorSmith’s study on the best cities for lawyers weighed three major factors in its ranking.

1. Cost of living index for each city

The cost of living was used to adjust the salaries earned in each city. Because some cities with very high compensation for lawyers, such as New York City, also suffer from very high costs of living, we normalized salaries using a cost of living index so that the lifestyle that a lawyer can expect in different cities could be compared more fairly. More affordable cities scored higher in our ranking of cities.

2. Average annual salaries for lawyers in the city

An important factor in deciding a place to practice law is the average annual compensation available to lawyers in a city. One variable we considered in our study is the pay that lawyers in each city can expect. Cities with higher pay were ranked more highly in this study.

Nationwide, the average salary for a lawyer in the United States was $144,230.

3. The density of jobs for lawyers in each city

According to the Bureau of Labor Statistics, there were 642,750 lawyers employed in the United States in 2018. The BLS also predicts that employment for attorneys will increase 8% in the 10-year period between 2016-2026.