Take a look at our deep dive into determining which U.S. cities are best for insurance agents to pursue their careers in.

Insurance is an important risk management tool that can help provide financial protection for the most important assets in our lives. While insurance is key for protecting our homes, cars, and businesses, the topic of insurance can be both arcane and confusing. Insurance agents can help consumers and businesses understand and select insurance coverage that is appropriate for them. Being an insurance agent is a rewarding career that promotes stability and peace of mind.

To become an insurance agent, most states require agents to pass an exam and apply for a license. In this study, we highlight some attractive cities for insurance agents to consider as they decide where to pursue their careers.

Using data from the Bureau of Labor Statistics, we ranked 343 of the largest U.S. cities for their attractiveness to insurance agents. We list the top 50 cities where insurance agents can successfully pursue their careers. In our study, we also break down the top small, midsize, and large cities for insurance agents in the United States.

As the biggest city in Alabama by population, Birmingham is an important Southern regional hub. The city, which is named after Birmingham, England, was an important industrial center for the South from its founding through the 1960s, with major iron and steel production facilities. After the 1960s, Birmingham diversified its economy, with banking being a leading industry in the city. Several major financial services employers include Regions Financial, Blue Cross-Blue Shield of Alabama, BBVA Compass, Wells Fargo, Protective Life Corporation, and State Farm.

Saginaw, located in Central Michigan, was an important lumber town in the 1800s, and in the 1900s, it was an important auto and industrial manufacturing center. The city, which is located along the Saginaw River, once hosted multiple General Motors plants and was also an important base for military production during World War II. Today, one of the major insurance employers in the city is Frankenmuth Insurance.

Located in the center of the state, Des Moines is the capital city and the largest city in the state of Iowa. The city’s growth started with coal mining in the late 1800s, and the city later grew through industrialization. After the 1980s, the city transformed into a white-collar, professional city. Today, Des Moines hosts several major financial services firms including the Principal Financial Group, Marsh, Wells Fargo, Voya Financial, and Nationwide Insurance.

Jackson, Mississippi is the capital city and the most populous city in the state of Mississippi. The city is located on the Pearl River and named after President Andrew Jackson. In the early 1900s, multiple railroads expanded service into Jackson, leading to economic growth. In the 1930s, natural gas was discovered near the city, which led to even more economic development.

Grand Island is the largest city in Nebraska outside of the Omaha and Lincoln metro areas. The city is located slightly east and south of the center of the state and was founded by German settlers from Iowa. The city’s growth was catalyzed by the opening of a Union Pacific railroad station in 1868.

Our study segmented cities into different sizes based upon population. Since individuals may have different preferences regarding the type of city they’d like to live in, we list the top small (population under 150,000), midsize (population of 150,000-500,000), and large (greater than 500,000 population) cities for insurance agents. 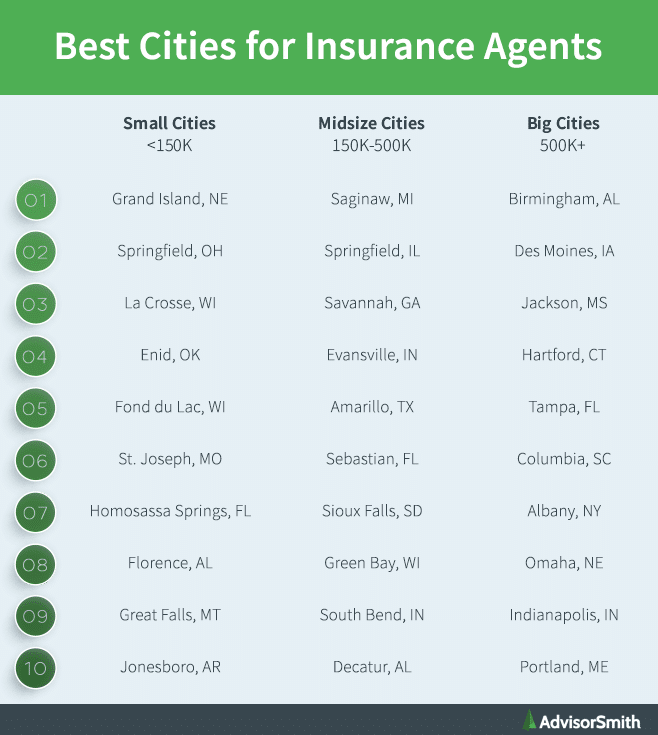 Our study used data from the U.S. BLS Occupational Employment Statistics data set. We considered the average annual salaries that insurance agents in each city were paid. Cities with higher salaries scored more highly in our study.

Within the entire United States, the average salary for insurance agents was $67,890. The job outlook for insurance agents is good, as the BLS expects that employment in the field will grow by 10% in the period 2016-2026, which is faster than job growth in the economy overall.

Our study also adjusted the salaries earned in each city by a cost of living index in order to equalize comparisons across cities. Since the cost of living, including necessities such as rent, transportation, and groceries, can vary across different cities, it is important to normalize the salaries so that the cities can be compared fairly. Cities with a lower cost of living were ranked more highly in our study.

In 2018, there were 393,830 insurance agents employed in the United States, according to the Bureau of Labor Statistics.