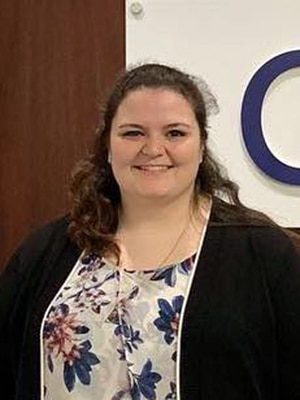 Ella Barker is a senior at Roosevelt University in Chicago. Ella is majoring in actuarial science with minors in finance and computer science. She is currently president of the university’s Math and Actuarial Science Club, as well as the vice president of CRISP, a student-led group that facilitates job shadowing for students. She will graduate in December 2020. We spoke with Ella in May 2020.

I’m a first-generation college student. Navigating the finances of college and applying for loans and scholarships was pretty rough at the beginning. I actually went to school at Roosevelt for a year, then went back to community college and worked full time while going to college part time. Figuring out the logistics got easier at the community college, and it got easier the longer I was working toward the degree.

Roosevelt always stuck out to me for the social justice culture. While I’m going for a degree that’s heavily math based, it was nice to be at a school that valued social justice so much.

What has your experience at Roosevelt University been like?

I’ve always loved the school and Chicago. It’s always felt like a home away from home. I went on a tour of Roosevelt when I was still a senior in high school, and it drew me in right away. One thing that drew me to Roosevelt was that it’s big on social justice, and I’ve loved that. I’m currently the president of our Math and Actuarial Science Club and the vice president of a student-led group called CRISP, which stands for the Collegiate Research Initiative and Shadowing Program. Being a leader in these clubs has kept me pretty busy, but it’s also been really rewarding. My freshman year was great here, but coming back the second time, I’ve become much more involved on campus.

What other schools were you considering, and why did you choose Roosevelt University?

I was born and raised in Michigan, about two hours away from Chicago, so most of the schools I looked into were in Michigan. I initially narrowed it down to Michigan State University, Ball State, St. Xavier’s, and Roosevelt. Roosevelt always stuck out to me for the social justice culture. While I’m going for a degree that’s heavily math based, it was nice to be at a school that valued social justice so much. They have small class sizes as well, which is what I was used to. You walk into a class and the professors know your name right away and care about how you’re doing in the class.

My associate’s degree is in math, and when I was researching what I could do after I graduated, actuarial science was always one of the top-listed choices for a career. The more I looked into it, the more it fascinated me. During my first semester back at Roosevelt, I went to a conference called NRRA, which stands for the National Risk Retention Association. It’s primarily targeted for risk retention groups, so it was focused on insurance, but a bunch of actuaries were there too, and I got to talk with a lot of them and learn what working as an actuary is like. Everyone loved their job, and it was easy to see why.

Roosevelt has an amazing program with amazing professors. The class sizes are small, so you get to know your professors very well, and they’re always willing to help. I’m really close with most of my professors, which has helped when I didn’t understand something going on in class or just needed to talk to them about my career options.

I love the curriculum at Roosevelt. I’ve taken a lot of math classes, and I’ve just always loved math. Ever since I was in middle school, math has always been the one thing I knew and was good at. Because I added a computer science minor, I’ve found I’m enjoying those classes as well. Roosevelt also has a few seminar classes that help you prepare for the actuarial exams. Right now, I’m taking the seminar that prepares you for Exam FM.

I also recently became president of the Math and Actuarial Science Club. Unfortunately, we’ve had to cancel most of this semester’s events due to the pandemic. Usually, though, we get together and have someone give a math-related talk, or we’ll invite a group of actuaries to come give a talk about what they do. It’s a great way for the students to be able to interact with actuaries and be able to ask them any questions that they want.

I’ve been involved with CRISP for almost two years. We mostly focus on the shadowing aspect, where students get to follow a professional around during a standard workday, so we try to get students into the program and match them with actuaries who they can shadow. We usually shadow people as a group. We were able to shadow at a company before the semester started. There were about six people who were available to us. We had the president, the CFO, a few underwriters, and a few actuaries. We got to sit down, see what they do each day, and ask questions.

One of the classes I’m in right now is called Industrial Research Problems. It’s what the school calls an experiential learning class. We’ve been working with The Field Museum of Natural History. The Field Museum sent their data to our class, and then we got to talk to some biologists from the museum about what they wanted to see done with this data.

I actually took the class last year, and I asked if I could take it again because I loved working with The Field Museum and getting hands-on experience. My professor Melanie Pivarski teaches the class. She split us into groups to work through the data that they sent us. My first semester was mostly learning Excel macros, which has helped this semester. This semester has been more about the statistical side of the data that we’ve run.

What is unique about focusing on actuarial science relative to other majors you could have chosen?

What has been most challenging about studying actuarial science? Is there anything you wish you had known ahead of time?

The most challenging part has been finding time to study. Luckily, a lot of the studying and preparing for quizzes and exams in my FM prep class has helped my preparation for the actuarial exam. Going into actuarial science, you often read that you need a minimum of 200 to 300 hours of studying for each exam, but I don’t think you realize how much time that is until you start.

What’s happening right now with the pandemic, as it relates to the insurance industry, has been really interesting to watch. I get daily briefing emails about the industry, and it’s been fascinating to see the headlines that come out every day. During this kind of rare event, you never know what you’re going to read in the news or in an email about insurance and reinsurance. Just yesterday, I was reading about how rates across commercial lines will be impacted by the pandemic and what one reinsurance company expects to see happen to claims.

I’m planning to move to Seattle and get involved in the insurance industry out there. I’ve had a lot of experiences with different facets of insurance and finance that have interested me. Since I added my computer science minor at the end of my junior year, it has also fascinated me to see the integration of computer science and how it modernizes the field. I’d love to stay in the insurance or finance field.

Get involved as soon as you can. Going to conferences and meeting with people in the industry is a really good way to learn about it. You get to hear from people on panels at the conferences, and you can walk up to them afterward and ask any questions that you had about their panel or career. I’ve also had the chance to shadow some actuaries, and seeing what they do every day and having that experience has been a good way to shape what I would like to do in the future.

» If you liked Ella’s interview, check out our other actuarial science student interviews.