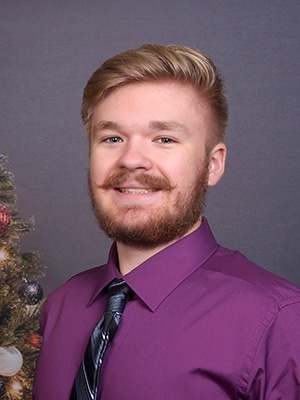 Xander Praski is a sophomore at Rider University in Lawrence Township, New Jersey. He is a double major in accounting and actuarial science and will graduate in 2023. Xander is currently working to start New Jersey’s first chapter of Gamma Iota Sigma, a professional fraternity for students interested in insurance, risk management, and actuarial science. We spoke with Xander in June 2020.

When I got to Rider, I attended an insurance panel meeting early in the year. One of the deans of the College of Business had proposed starting a chapter of Gamma Iota Sigma. Doing further research, I found that there wasn’t a chapter in New Jersey, so I started collaborating with a few fellow actuarial science majors to get a chapter started. COVID halted things a bit, but this summer we’re still working to get the chapter started. Since it will be the first chapter in New Jersey, I would like to expand it and found other chapters in other colleges in New Jersey as well.

At Rider, you have the opportunity to be more of an individual, and I think that’s great preparation for any student going into their respective field.

What has your experience at Rider University been like?

I’ve loved my experience thus far. I love that Rider is a small university. The fact that it is small enables students to cultivate more intimate relationships and establish more connections with their professors and other professionals in their respective fields. It also allows for smaller class sizes. In the classes that I’ve taken, the maximum number of students was 30 people. At other universities, you’ll have a lecture hall with a few hundred people, and you might feel like you’re just a number. At Rider, you have the opportunity to be more of an individual, and I think that’s great preparation for any student going into their respective field.

What other schools were you considering, and why did you choose Rider University?

When I was looking at colleges, I knew that I wanted to stay somewhat local. The farthest away university I applied to was Boston University. But in general, I applied to universities within New Jersey, New York, and the Pennsylvania area. I applied to Rutgers, Monmouth University, Fordham University, and Drexel University. A lot of those schools don’t have an actuarial science program. That’s because when I was initially looking for schools at the end of my junior year of high school, I was more focused on accounting than actuarial science.

I took a tour at Rider early in my senior year, and as soon as I stepped on campus, I was pretty sure that I was going to go there because of their actuarial program. They also have a great accounting program and business school. I really liked the small size of the university and the fact that it’s far enough from home that it doesn’t feel like I’m living at home, but close enough so that if anything were to happen, home is only about a 45-minute drive away.

I actually didn’t know what actuarial science was until my sophomore year of high school. I’ve always really enjoyed math and numbers in general, so not knowing what actuarial science was, the first career path that came to my mind was engineering because my father works with civil engineers. I ended up taking a physics class, and after that class, I decided that maybe engineering’s not for me. Accounting was the second thing that came to mind. I took an accounting class in high school and really enjoyed it. After that, I was pretty set on becoming an accountant and getting my CPA. I do still intend to get my CPA certification, but I’ve also decided to pursue an actuarial career.

I think what makes a program great at any school is the staff, the professors, the advisors, and the deans. From what I’ve experienced so far at Rider, they’re all great. My advisor, Dr. William Amadio, has been very good when it comes to helping me schedule my classes. I came in with a lot of credits, which filled up my elective spots, so in the second semester, I couldn’t take more than four classes that were offered. He elected to have me do a supervised study with him, which I thought was really cool.

Like I mentioned earlier, when I went to an insurance panel meeting early on in the year, one of the business deans proposed we start a Gamma Iota Sigma chapter at Rider. She’s been really helpful with that whole process. She’s reached out to a lot of professionals that might be interested in helping us found it. Overall, the staff at Rider have been just phenomenal so far.

For extracurriculars, because Rider is a small university, there aren’t a ton of activities for actuarial science majors. But like I mentioned earlier, I’m in the process of starting our chapter of Gamma Iota Sigma. I also want to try to start an actuarial science club, which would be a little bit more casual than a professional fraternity. Ultimately, I want to make people more aware of actuarial science in general.

My favorite class so far has been Introduction to Business. Part of the curriculum is something called the “Business in Action” program. What happens is various donors give money to the program, and students are assembled into teams of four to six people, with the goal of starting a business with the money and running it for about two months. Students work toward generating a profit by implementing the plan they design in class, and then the profits are donated to a charity of the students’ choice. In the end, students present their findings, challenges, and what went well. I wasn’t sure if I would enjoy that, but my team actually got second place overall out of all classes. It ended up being a really good experience.

What has been most challenging about studying actuarial science? Is there anything you wish you had known ahead of time?

I think the most challenging part has been the actuarial exams. I knew that the exams were going to be hard, but that’s such a subjective term. I’ve always been good at math, and I never really had to study that much for exams. I think a lot of students going into actuarial science are good at math and have taken higher-level math courses like calculus and precalculus in high school, and they think that if they study for about 10 hours, they’ll be good for the exam. But I’ve been studying for about three weeks right now. I’ve probably studied around 50 or 60 hours already, and I plan to study all the way up until the exam. The time commitment for studying is something I wish I had known beforehand.

The biggest developments in the insurance industry right now are in the health and medical fields, because of the coronavirus. It’s an interesting time. A lot of insurance companies are trying to fulfill their social responsibility, where as long as a person has any type of health or medical insurance, I believe they’ll waive the premium for coronavirus treatment, so the insurers are incurring a lot of medical benefit expenses. That’ll obviously decrease their profits. If the virus continues to blow up to even more massive proportions, it’ll be interesting to see how the insurance industry responds.

In actuarial science, I am interested in finance, investments, and pensions. I’m interested in those fields because I also enjoy following the stock market. There is a new type of actuarial credential from the SOA called Chartered Enterprise Risk Analyst (CERA), which I’m definitely looking into. From what I’ve gathered, a finance and investment actuary tries to maximize profits for the shareholders, and it seems that an enterprise risk actuary tries to maximize profit and minimize risk for the company itself.

I do plan on getting my CPA as well. Who knows? Maybe further down the line, I’ll be a CFO or a CRO—a chief risk officer, which is also pretty new—or a head actuary. Maybe after a long career in corporate America, I could give back by becoming a professor at Rider University, teaching the next generation of actuaries.

I would definitely recommend talking to someone within the field. You can do all the research that you want online, but the best way to get a grasp on what an actuary does on a day-to-day basis is to ask an actuary for yourself. In high school, I would also watch YouTube videos of people pursuing actuarial science, which was a good tool to learn what to expect and see how their experience was.

In addition, I would also suggest that anyone looking to pursue a career in actuarial science makes a concerted effort to put themselves out there. All prospective actuarial students are very intelligent; however, many are not outgoing, which tends to hold them back from being as successful as they could be. Building your professional network may require you to be uncomfortable in certain situations, but in the long-run, you will see more success than if you decided to be complacent.

» If you liked Xander’s interview, check out our other actuarial science student interviews.