Take a look at our deep dive into the U.S. cities where manufacturing is booming.

Geographically, the Midwest and South accounted for 39 out of the top 50 cities in the study while the Northeast only had 3 cities. Regional patterns emerged with the Midwestern cities primarily focused on automotive, agricultural, and raw materials manufacturing while the South maintained strong oil and gas, chemical, and furniture industries.

Top Cities Where Manufacturing is Thriving by City Size

The majority of the top cities for manufacturing in our study—43 in the top 50, and 9 in the top 10—were small and midsize cities. Small cities with a powerful hold on significant manufacturing industries dominated our list, and Indiana, with 3 out of the top 4 spots, had a particularly strong showing at the top of our ranking.

We segmented cities by metropolitan statistical area population, with small (<150,000 population), midsize (population between 150,000 and 500,000), and large (over 500,000 population) cities. Below are the top 10 small, midsize, and large cities where manufacturing is booming. 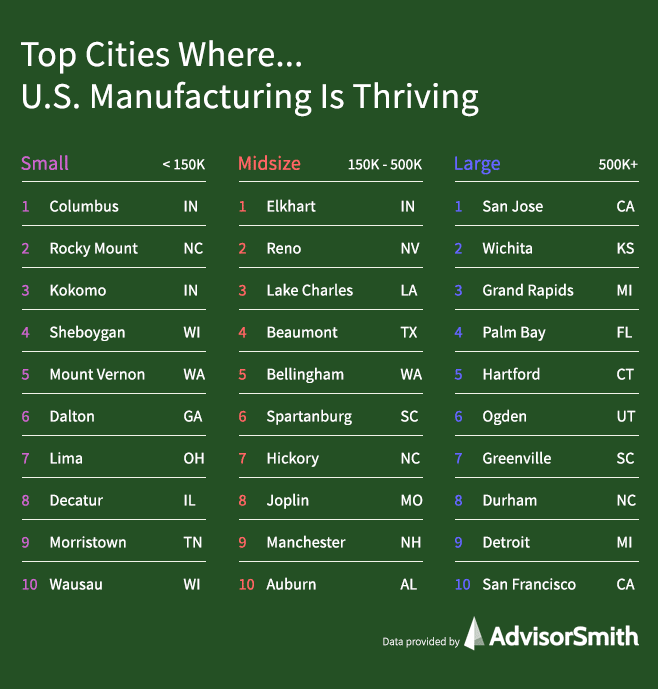 Top Cities Where Manufacturing is Thriving

Elkhart, Indiana, was the top manufacturing city in our study and the only midsize city in the top five. Elkhart is a city in northern Indiana just fifteen miles east of South Bend, the economic and cultural center of Northern Indiana. Elkhart and the surrounding cities in Elkhart County are referred to as the “RV capital of the world.” 52% of all RVs produced in the United States are produced in Elkhart County.

Columbus is a small city in central Indiana located approximately 40 miles south of the state capital, Indianapolis. Columbus is one of the biggest manufacturing cities in the nation, as 38% of the people who work in Columbus work in the manufacturing industry. Columbus is particularly well known as a producer of automotive engines, and this is, in no small part, due to the city serving as the headquarters of Cummins, a Fortune 500 corporation that designs, manufactures, and distributes engines. Columbus is also home to Toyota Material Handling, U.S.A., Inc., which is the world’s largest manufacturer of forklifts.

Rocky Mount is a small city in northeastern North Carolina that was originally known for its textiles and agriculture industries. Over the years, it evolved into a manufacturing and pharmaceutical powerhouse, helped in part by its distribution-friendly location at a junction for major highways and railways. The area is home to several major manufacturing companies, including Cummins, an engine-producing company and one of the area’s largest employers, and Corning Inc., a specialty glass manufacturer. Rocky Mount continues to be an attractive area for advanced manufacturing jobs and is one of the largest producers of medical devices and diesel engines in the nation.

Kokomo is a small city in central Indiana that is particularly renowned for its automotive and manufacturing industries. The city was historically successful due to the presence of major automotive companies like Chrysler, Delphi, and General Motors, but Kokomo was severely impacted by the financial crisis in 2008 and the automotive industry crisis that followed. In the ensuing economic recovery, the auto industry also experienced a recovery, which benefited Kokomo’s manufacturing sector. Today, Kokomo is one of the biggest producers of automotive transmissions parts in the nation.

Sheboygan is a small city in eastern Wisconsin that was once an active shipping port due to its location along Lake Michigan at the head of the Sheboygan River. Business in the area once revolved around cooperage, or the making of barrels and casks, in the 19th century, but it is now a major industrial center that produces various manufacturing products including automotive parts, metal products, furniture, plastics, and orthodontic goods. Kohler Co., which manufactures enameled iron and metal sanitary ware, is the largest employer in the area with over 5,000 employees, and other large manufacturing employers include Rockline Industries, Bemis Manufacturing Company, and Nemak.

Manufacturing output per capita measures the dollar value of the manufactured goods produced by a city divided by the city’s population. It provides a measure of the manufacturing production per city resident. The highest ranking city on this metric was Columbus, Indiana, which also placed #2 overall.

In the table below, we list the top cities where manufacturing jobs have grown the most on a compound annual growth rate percentage basis between 2014 and 2018. The #1 city, Reno, Nevada, is home to the Tesla Gigafactory 1, which accounted for substantial job growth in the city during the past five years.

Data was compared at the Metropolitan Statistical Area (MSA) level for 318 US cities. Each city was assigned a score from 0 to 100 for each of the four factors based upon its relative rank on the factors. The four scores for each city were averaged to create a composite score, and the 318 cities were ranked based upon the composite score.

To determine the growth rate of manufacturing output for each MSA, we used data from the December 2019 release of the U.S. Bureau of Economic Analysis Local Area Gross Domestic Product dataset. We calculated the compound annual growth rate between 2014 through 2018. For this dataset, data for specified cities and years was withheld to avoid the disclosure of confidential information. Where possible, we interpolated data in order to estimate the manufacturing output for cities and years where the data was withheld. MSAs in which data could not be successfully interpolated were excluded from the study.

In order to calculate the manufacturing employment location quotient for this study, we calculated the percentage of manufacturing jobs divided by total jobs in the United States, which was 8.2% at the end of 2018. We then calculated this same percentage for each MSA, using data from the US Bureau of Labor Statistics Current Employment Statistics and Current Population Survey. To calculate the location quotient, we took a ratio of each city’s percentage divided by the national percentage.