Take a look at our deep dive into determining the top cities where Americans start the most businesses.

New business formation is an important driver of employment and the creation of new jobs in the United States. In this study, AdvisorSmith researched the number of new businesses formed on a per capita basis in 353 U.S. cities and 50 U.S. states to find the cities and states where people are most likely to start a new business. We also broke down the cities by size in order to fairly compare business creation rates in similar-sized cities.

Top Cities Where Americans Start the Most Businesses by City Size

AdvisorSmith segmented our study into cities of small (<150,000 population), midsize (population between 150,000 and 500,000) and large (over 500,000 population) sizes. Below, we list the top 10 cities where Americans are most likely to start a business broken down by the city’s size. 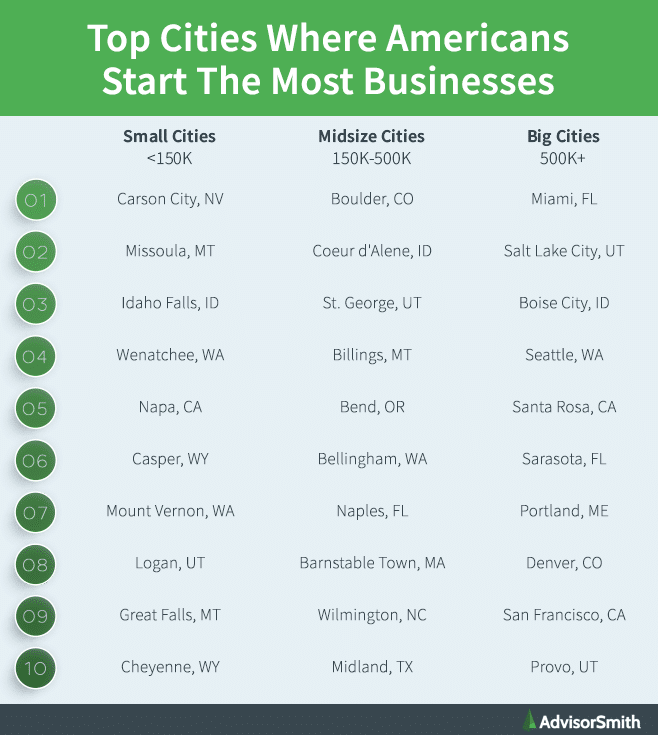 Top Cities Where Americans Start the Most Businesses

As the capital of Nevada since the state was established in 1864, Carson City was named after the American frontiersman Kit Carson. The city was founded as a stopover for travelers to California, but it later gained substantial population when silver was found nearby at Comstock Lode. Located just east of Lake Tahoe and south of Reno, Carson City is a center for both business and politics in Nevada. The city also has some tourism-related economic activity, with gambling and hospitality being contributors. As the city with the highest rate of new job creation in the country, Carson City had 4.61 new businesses started per 1,000 residents.

Boulder is a midsize city located 25 miles northwest of Denver at the foot of the Rocky Mountains. The city was initially settled by gold prospectors in the mid-19th century, and soon afterwards, it was chosen to be the main location for the University of Colorado. The existence of the University has exerted a strong influence on the history and economy of the city, with a highly-educated population and strong quality of life. Boulder is also well known for its strong culture of bicycling, which includes a substantial dedicated bike infrastructure. Boulder had 4.52 businesses started per 1,000 population in this study.

Missoula is a small city that started as a trading post in the mid-1800s. The city is located along the Clark Fork River in western Montana, and it is the second largest city in Montana. Lumber became a key industry in the city, along with education as the University of Montana was established in 1893. The existence of the University has provided the city with a highly-educated workforce and encourages the development of technology startups, in addition to being the city’s largest employer. Missoula had a very high new business creation rate of 4.09 per 1,000 residents.

Coeur d’Alene is located in the northwestern portion of Idaho, near the city of Spokane, Washington. Coeur d’Alene is situated on Lake Coeur d’Alene, with a growing economy driven by resort tourism as well as nearby ski resorts. The city has many outdoor activities, including boating, mountain biking, kayaking, hiking, riding ATVs, hunting, and fishing. Locals call the city “Lake City” or simply CDA. Entrepreneurs in Coeur d’Alene started 3.87 new businesses per 1,000 people in our study.

Located in the southern part of Utah, adjacent to the Arizona border, is St. George, a midsize city near several well known national parks, such as Zion National Park, Bryce Canyon National Park, and the Grand Canyon. Tourism to these parks is an important part of the economy in the city. Due to the city’s warm desert climate, golf is another important draw to the city, with many residential communities oriented around golf courses. St. George also hosts the headquarters of SkyWest Airlines. St. George had a new business creation rate of 3.83 new businesses created per 1,000 population.

Top 50 Cities Where Americans Start the Most Businesses

Below, we list the top 50 cities where Americans start the most businesses. We list each city’s number of new businesses started per 1,000 population and also list the city size. Of the top 10 cities, 9 of the top 10 are small and midsize cities in western states.

States Where Americans Start the Most Businesses

Our study ranked the 50 U.S. states by the number of new establishments opened on a per capita basis, showing where people are most likely to start a new business. The top 7 states, Montana, Washington, California, Idaho, Utah, Colorado, and Wyoming, were all western states.

We supplemented this data with more recent state-level data from the BLS Business Employment Dynamics reports, which provided establishment count and openings data. Using these two data sets, we arrived at an estimate of new business openings in each metro area.

The data sets we used focused on firms that have one or more employees. Therefore, this study did not include entrepreneurs who started self-employed businesses that did not have paid employees. This also excludes business entities formed for holding company purposes, such as real estate or financial holding companies.