Take a look at our deep dive into determining which U.S. cities are best for physical therapists to pursue their careers in.

Physical therapists play an important role in helping ill or injured patients improve their mobility and reduce or manage pain. For individuals with back or neck injuries, sprains or strains, sports injuries, strokes, and many other conditions, physical therapists can assist in creating plans for recovery. Commonly, physical therapists prescribe exercises, help with stretching and hands-on manipulation, and use specialized equipment to help patients heal physically.

Becoming a physical therapist requires a Doctor of Physical Therapy (DPT) degree and a license from the state in which the therapist wishes to practice. Gaining a DPT license requires passing an exam. Usually a DPT degree is a 3-year program which requires a bachelor’s degree for admission. Many programs also require some background in subjects such as anatomy, physiology, and biology and also include substantial clinical training. 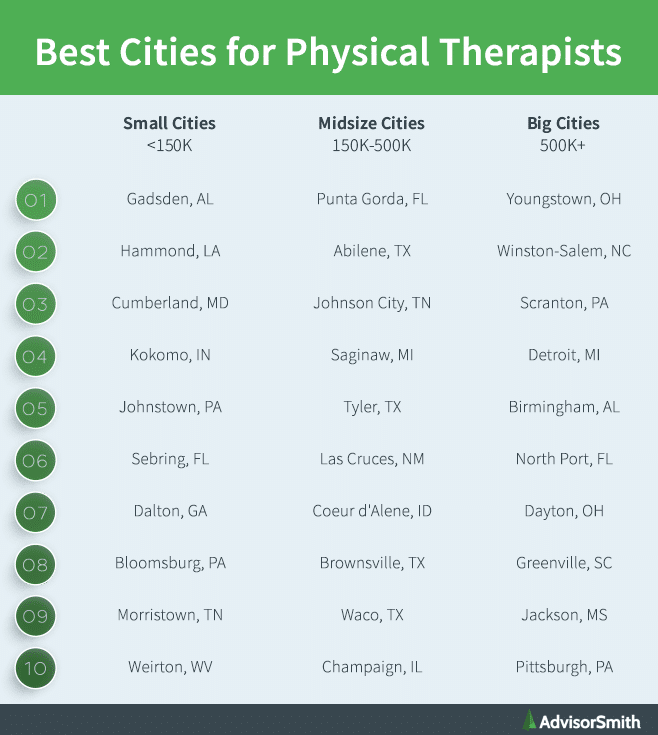 Located in northeastern Alabama along the Coosa River, Gadsden was an important river port and industrial center in the late 1800s. Important industries in the city included steel mills, tire factories, and other heavy industries. Today, the city has made progress on revitalizing its downtown and has created a Cultural Arts Center.

Hammond is located about 45 miles northwest of the city of New Orleans, and the city was founded as a railroad town. In the early 1900s, the production of strawberries became an important industry for the city, as strawberries were grown, packed and shipped north from the city. The city built on this heritage, and today Hammond continues to be an important logistics and distribution center.

The city’s name comes from Spanish, meaning “Fat Point.” Punta Gorda is a midsize city located in the southwest portion of the state of Florida and has been a popular retirement community since the 1960s. The city is located in Charlotte Harbor, which is one of the largest natural harbors in the United States. It has several recreational offerings, including fishing and golf, and the city has year-round sunshine.

In the 1800s, Cumberland was an important transportation gateway for roads, trains, and ships, and the city was the second largest in Maryland after Baltimore. With a decline in heavy industry in the 1950s, Cumberland lost a substantial number of jobs and experienced a decline in population. Modern-day Cumberland has a significant tourism offering, as visitors come to see the Arts & Entertainment District, the Western Maryland Scenic Railroad, and the C&O Canal. A significant healthcare employer in Cumberland is the Western Maryland Health System.

Located near the center of the state, Abilene, Texas is a midsize city in Texas that has approximately 210 physical therapists who earn an average annual salary of $90,420. The city benefits from a very low cost of living that is 16% below the national average, and it also has 109% more physical therapist jobs on a per-capita basis compared with the national average.

The city was originally established as a railroad town on the Texas and Pacific Railway in the late 1800s, and it also hosted a major U.S. Army base in the 1940s, which subsequently closed. However, the town still hosts a U.S. Air Force base, Dyess Air Force Base, which has been open since the 1950s. Abilene has three major universities: Hardin-Simmons University, Abilene Christian University, and McMurry University. Large medical institutions in the city include Hendrick Health System and the Abilene Regional Medical Center.

According to the Bureau of Labor Statistics, the job outlook for physical therapists is very positive, with a projected growth rate of 22% for the profession between 2018 and 2028, which is much higher than the average growth rate across all professions.

Approximately 247,700 physical therapists were employed in the United States in 2018 according to the BLS.

Physical therapist salaries in our study were adjusted by a cost of living factor for each metro area. Because the same salary in a low cost area provides much more purchasing power than in a high cost area, we scored areas with a lower cost of living more highly in our study. Since physical therapists are needed in metro areas of all sizes, we would expect that they would earn more in expensive metros, although this is not always the case. This effect is partially offset by the higher cost of living in these expensive metros.