Take a look at our deep dive into determining which U.S. cities are best for nurses to pursue their careers in.

Nursing is one of the most important professions in the healthcare field. As the population ages, and as healthcare technology continues to advance, the demand for Registered Nurses continues to grow. Registered Nurses can work in a variety of healthcare settings, with 60% working in hospitals, and the rest in clinics, doctors’ offices, home health care settings, long-term care facilities, and others. Additionally, for many Registered Nurses, their jobs involve shift work or working on rotating schedules, and they may be required to work overtime or overnight shifts.

Obtaining a position as a Registered Nurse requires graduating from an accredited nursing program, passing a nursing examination, and obtaining a license from their state. Registered Nurses may also choose to pursue additional qualifications such as becoming an advanced practice registered nurse.

Becoming a Registered Nurse requires dedication to the craft, education, and care for patients, and the profession is rewarded with higher than average salaries and the satisfaction of helping others. In this report, AdvisorSmith studied the best places for Registered Nurses to consider pursuing their careers.

Rochester, Minnesota is the third-largest city in the state of Minnesota. This midsize city is located along the Zumbro River and is named after Rochester, New York, the hometown of the city’s founder. Rochester is home to the world-famous Mayo Clinic, one of the top hospitals and medical centers in the world. The Mayo Clinic has hosted heads of state, Hollywood celebrities, and elite athletes seeking out specialized medical treatment.

Flint, Michigan is a midsize city located in Mid Michigan. General Motors was founded in the city in 1908, and the city was an important auto manufacturing center through the 1980s. Major employers of nurses in the city include the Hurley Medical Center, which is a teaching hospital affiliated with the medical schools at Michigan State University and the University of Michigan. McLaren Flint is another teaching hospital affiliated with the Michigan State University College of Human Medicine.

Registered Nurses in Flint earn an average salary of $74,990, which was near the national average. However, the cost of living in Flint is 18% below the national average, meaning nursing salaries stretch further. Additionally, the city of Flint hosts 53% more nursing jobs on a per-capita basis compared with the average U.S. city.

Bay City, Michigan is a small city located alongside Lake Huron. Historically, Bay City grew due to the presence of lumber mills and shipbuilding. Its location on the Saginaw River made the city an ideal location for floating logs down the river to mills and factories. Today, Bay City hosts the McLaren Bay Region Medical Center, which is the top employer in the city. This hospital provides substantial employment to registered nurses in the city.

Redding is a midsize city in the northern part of California, situated along the Sacramento River. The town was established due to its location as a terminus for the Central Pacific Railroad. Growth in the town commenced due to copper and iron mines in the vicinity and later continued because of the construction of the Shasta Dam nearby. The lumber industry also contributed significantly to the city’s growth.

Redding hosts two major hospitals, including the Shasta Regional Medical Center and Mercy Medical Center Redding. Nurses in Redding earn average salaries of $96,220, which is 31% above the national average. Additionally, Redding has 30% more jobs for registered nurses compared with the pool of all jobs in the city.

Modesto is a large city located in California’s Central Valley and was originally a stop on the railroad connecting Los Angeles and Sacramento. As with many Central Valley cities, Modesto was an important agricultural city, and George Lucas, the creator of Star Wars, was born in the city. Several large hospitals in Modesto include Memorial Medical Center, Tenet Healthcare, Kaiser Permanente, and Sutter Gould Medical Foundation.

Registered Nurses in Modesto earned an average six-figure salary of $106,460. Even though Modesto’s living costs were 16% above average, this salary was sufficiently high to overcome the higher costs of living. Modesto also had 12% higher employment for registered nurses compared with the average U.S. city.

Top Cities for Nurses by Population

AdvisorSmith’s study segmented the top cities for registered nurses into small, midsize, and large cities. Because nurses choosing a city may have different lifestyle preferences, we broke down the comparison by looking at cities with populations under 150,000, populations between 150,000-500,000, and populations of 500,000 and above. 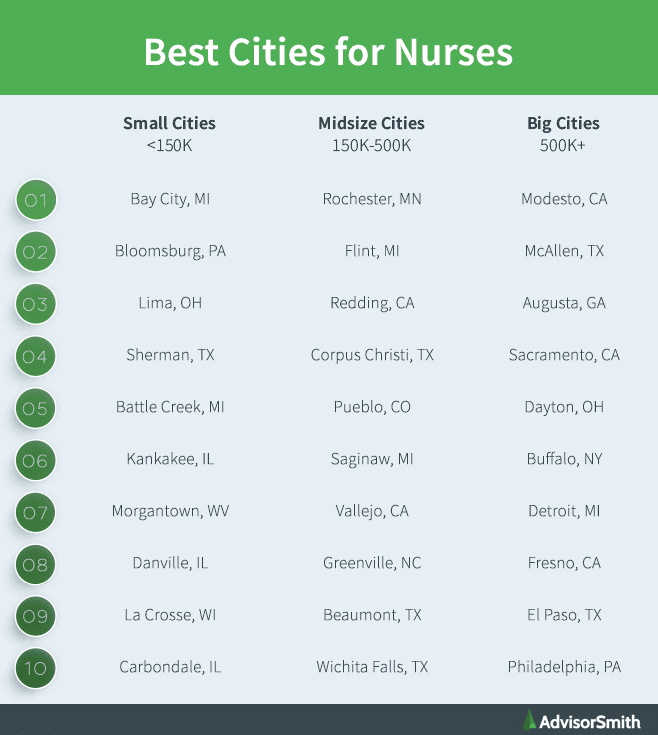 Below, we list the top 50 cities for registered nurses. We include information about the total number of nursing jobs in the city, as well as average hourly and annual salaries, the location quotient, the cost of living, and the city size.

Our study considered several inputs in order to rank the best cities for registered nurses. We included data from the Occupational Employment Statistics data set from the Bureau of Labor Statistics, as well as a cost of living index.

Living costs in each city

We used a cost of living index to adjust salaries when comparing cities. A large factor in the quality of life that a nurse can afford is the cost of essentials like housing, transportation, food, entertainment, and other components of the index. We adjusted nursing salaries in this study, ranking cities with a lower cost of living with a higher score.

The average salary for a registered nurse nationwide was $73,550. Additionally, the Bureau of Labor Statistics predicts that nursing employment will increase 15% over the period 2016-2026, which is much faster than overall national job growth.

In this study, we compared nursing salaries for 375 cities. Cities that offered higher salaries for registered nurses were ranked more highly in our survey.

Availability of jobs for registered nurses