Take a look at our deep dive into determining which U.S. cities are best for dental hygienists to pursue their careers in.

Our analysis found that many of the best cities for dental hygienists are small and midsize cities. Smaller cities have, on average, older populations as compared to big cities, and as people keep more of their original teeth than did prior generations, the need to maintain and treat teeth is fueling higher demand for dental hygienists. Coupled with lower costs of living, smaller cities won out in our study, with 10 of the top 10 and 44 of the top 50 cities having populations under 500,000.

Located north of Dallas near the southern Oklahoma border, Sherman was the top city in our study of the best cities for dental hygienists. Sherman, founded in 1846, is an industrial and retail hub, and its top industries include health care, manufacturing, and retail trade. Top employers in Sherman include Tyson Fresh Meats, Wilson N. Jones Hospital, and Texas Instruments. In the late 19th century, Sherman was considered “The Athens of Texas,” with the development of many institutions of higher education. Sherman is home to Austin College, a private, Presbyterian, liberal arts college that is the oldest university in Texas operating under its original charter.

Medford was the #1 midsize city in our study for dental hygienists. Located just 27 miles north of the northern California border, Medford has an economy that was historically fueled by agriculture and timber products. Harry & David, the largest direct marketer of fruit and food gifts, was founded in Medford in 1910. Today, Medford’s economy is primarily driven by the health care and social assistance industry. Medford boasts two major medical centers, Asante Rogue Regional Medical Center and Providence Medford Medical Center, and is also seen as an ideal retirement destination.

Flint is located in Mid Michigan northwest of Detroit and is the seventh-largest city in the state. Flint’s economy has historically been dominated by the automobile industry. Nicknamed the “Vehicle City,” Flint is home to General Motors, which was founded there in 1908. Since the 1970s, GM has significantly downsized their workforce in Flint, leading to a major shift in Flint’s economy. Today, the health care sector is Flint’s largest industry, with Hurley Medical Center and McLaren Regional Medical Center serving as top employers in the city.

Situated just 30 miles west of Medford, our #1 midsize city for dental hygienists, Grants Pass is a small city in southwestern Oregon. Grant Pass’s economy, up until the 1970s, was primarily centered around the lumber industry. Today, the economy has shifted toward the service sector, with health care being the largest industry in Grants Pass. Asante Three Rivers Medical Center, a general acute care hospital that was the result of a merger between Josephine Memorial Hospital and Southern Oregon Medical Center, is the city’s largest employer.

Located in south-central Washington, Yakima is a productive agricultural region, known for growing most of the nation’s hops and also a burgeoning wine industry. Aside from agriculture, Yakima’s economy is powered by the health care and social assistance sector, with Yakima Valley Memorial Hospital, Yakima Valley Farm Workers Clinic, and Yakima Regional Medical & Cardiac Center being three of the top 10 employers in the city.

Forty-four of the top 50 best cities for dental hygienists were small or midsize cities, but the small town atmosphere may not be ideal for everyone. In order to highlight this distinction in lifestyle preference, our study segments cities into different sizes based on population, listing the top 10 small (population under 150,000), midsize (population of 150,000-500,000), and large (greater than 500,000 population) cities for dental hygienists. 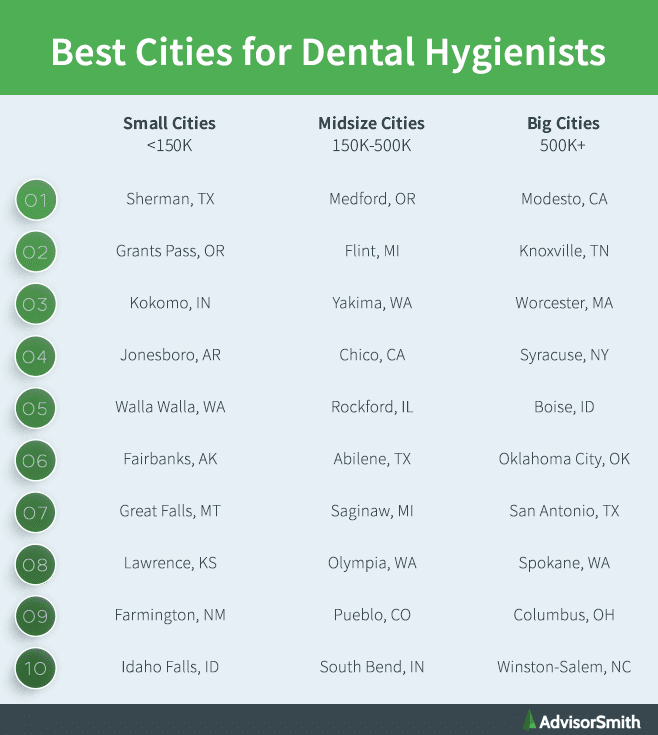 Our study used the average annual salaries that dental hygienists in each city were paid, with cities with higher salaries scoring more highly in our study.

Our analysis adjusted the salaries earned in each city by a cost of living index, in order to equalize comparisons across cities. The cost of living, including necessities such as rent, transportation, and groceries, varies by city, so it is important to normalize the salaries so that the cities can be compared fairly. Cities with a lower cost of living were ranked more highly in our study.

3. The density of jobs for dental hygienists in each city

In 2018, there were 215,500 dental hygienists employed in the United States, according to the Bureau of Labor Statistics. The BLS also predicts that employment for dental hygienists will grow at a 20% pace over the 10-year period of 2016-2026, which is over three times faster than the national job growth outlook. Demand for dental hygienists continues to be bolstered by an aging population, as well as continued research in the oral health field.