Take a look at our deep dive into determining which U.S. cities are best for carpenters to pursue their careers in.

As new housing starts and new construction continue to grow at a healthy pace, carpentry has become a much sought after skill. Carpenters are an indispensable part of the construction industry, working in various capacities to build, install, and repair the internal structures of buildings. From framing houses to building wooden structures to hold concrete forms, carpenters play a key role in any new residential or commercial construction. Carpenters also perform tasks such as installing windows, doors, insulation, and cabinets. The job of carpenter is a versatile one, and carpenters need to be able to follow blueprints, sketches, or other instructions.

Carpentry is a specialized profession that requires substantial training. Most carpenters either attend a trade or vocational school or learn in apprenticeships or on-the-job programs.

Our study considered important factors that carpenters can consider when choosing a location to pursue their careers in, including the salaries that carpenters can earn and how much it costs to live in a specific city. We also studied the availability of carpentry jobs in each city.

Kankakee is a city in northeast Illinois that was originally centered around a station on the Illinois Central railroad. The city is located about 60 miles south of the Chicago area. The notable architect Frank Lloyd Wright designed two houses in the city that still stand next to one another today. The city also hosts several lumber and flooring manufacturers that provide jobs for carpenters.

Carpenters in Kankakee earned an average salary of $63,180, which is 27% above the national average. This high salary is augmented by a cost of living 12% below the average. There are also 5% more carpenter jobs in the city relative to population than in the average American city.

Longview, Washington is a small city on the Cowlitz and Columbia rivers located in the southwest part of the state. The city was established as a lumber town to provide workers for two lumber mills in the city. Additionally, the city hosts an important port and has access to the Columbia River, I-5 highway, and railroads.

Longview’s enduring history as a center for timber processing and manufacturing makes it a great city for carpenters. The city offers average carpenter salaries of $69,590, or $33.46 per hour, which is 40% above the national average. Longview also has 33% more carpenter jobs per capita than the average city.

Located in southern Illinois, Carbondale was historically a regional transportation and business center. The city hosts the flagship campus of Southern Illinois University. One nickname for the city is “Little Egypt,” which comes from the fact that the city is located where the Ohio and Mississippi Rivers meet, similar to how the Egyptian city of Cairo is located in the Nile Delta.

St. Louis is a major American city located on the western bank of the Mississippi River, on the border of Illinois. St. Louis hosts many major corporations as well as museums and cultural institutions. Perhaps most notably, Anheuser-Busch, the brewer of Budweiser, is headquartered in St. Louis.

Elgin is a city about 38 miles west of Chicago. The city started as an agricultural town on the banks of the Fox River before becoming an important manufacturing center. In recent years, the city became one of the fastest growing cities in the state of Illinois.

Best Cities for Carpenters by Population

Since lifestyles differ substantially in cities of different sizes, below we highlight the most attractive small (population below 150,000), medium (population of 150,000-500,000) and large-sized (population above 500,000) cities for carpenters. We provide a breakdown by city to inform carpenters of their best choices in varied environments. 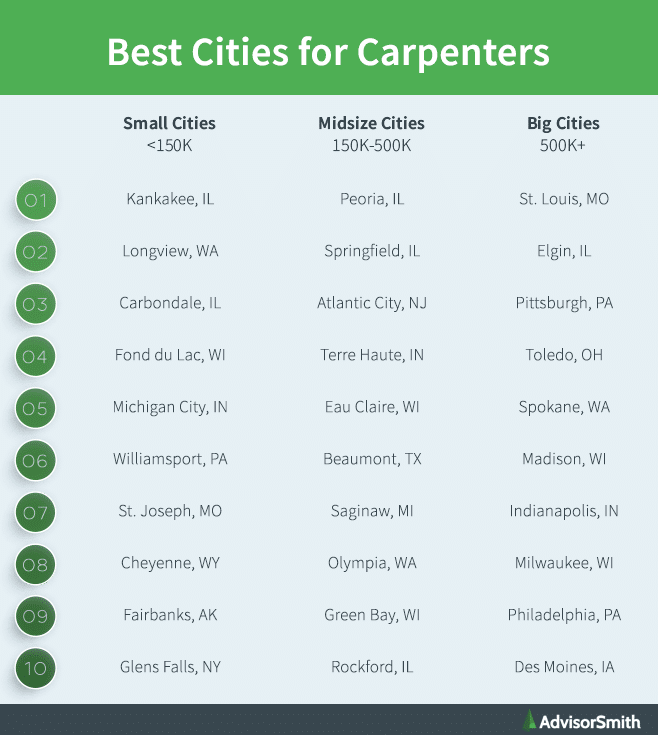 The most attractive 50 cities for carpenters are listed below. We include information about each city’s size, total carpenter employment, the average salary for carpenters in a city, the location quotient, and the cost of living.

Our study examined three key variables in order to determine the most attractive cities for carpenters to pursue their careers.

1. Availability of jobs for carpenters

2. Salary data for carpenters in each city

3. Each city’s cost of living index

AdvisorSmith’s study adjusted the salaries in each city by a cost of living index. Due to the variance in the cost of food, housing, transportation, and other costs, the lifestyle that a carpenter’s salary can buy in any given city varies. In order to equalize the impact of the differences across cities, we used a cost of living index to normalize salaries within our study.